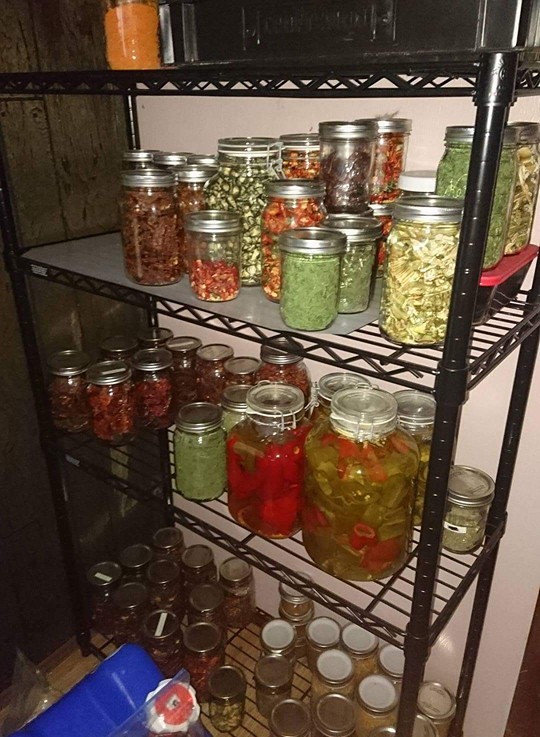 I can only eat food from a few specific farmers so I have to put up what is growing when it’s growing if I want to eat in the winter. You can learn about why this is by skimming through my Hidden Corn laundry list  and reading some of my corn-tamination posts on individual foods. Because of other allergies, my “lockdown season” has been from November until June. One of my farmer-mommies began planting some winter crops I could eat so my lockdown is now from about January to June. You can read exactly what I eat on my “What I Can Eat” post.

People frequently want to know what it looks like when you can’t just run out and buy food for half the year, so I took these pictures. What I have put up I will probably eat about 60-70% of this year, to myself. The large volume is mostly because I can’t eat any grains or starches due to not having safe sources. Corn is my anaphylactic and most sensitive allergy but I am also allergic to eggs, soy, and dozens of vegetables including all of the ones that grow in cold weather such as broccoli and cabbage.
PLEASE NOTE that the mason jar lids shown here are NOT safe for canning for most and may not be safe for frozen or dried storage for many. The BPA free canning lids from Ball and Kerr contain a resin that contains some corn. I personally can jar things with them but cannot have stuff that was canned (boiled in hot water for a long time) with them.

All of my preserved food is frozen or dehydrated because in addition to the Ball/Kerr canning lids containing a corny resin, I also do not seem to tolerate the Tattler canning lids. Not sure if this is a corn issue or not. I have not yet tried the Weck jars although I will eventually. More (but not enough) on corn-free canning here.

ANOTHER NOTE for people buying freezers- you want MANUAL DEFROST for any long term storage. “Frost Free” freezers are dehumidifiers which will eventually freeze dry your meat if it is not in a 100% airtight seal. My safe meat packaging is ziplocks, so those are not true hermetic seals at all.  I also observe, although the internet at large contradicts me, that frost free freezers contribute to MUCH faster freezer burn in all of my food.  I have meat in my manual defrost freezer from well over a year ago that is still totally fine, and it wouldn’t last nearly that long in a frost free freezer. 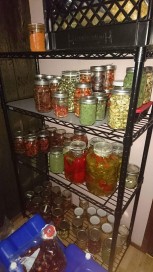 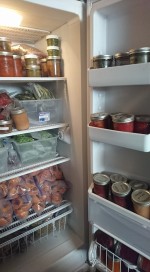 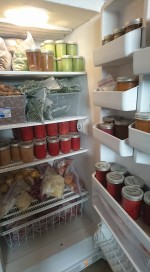 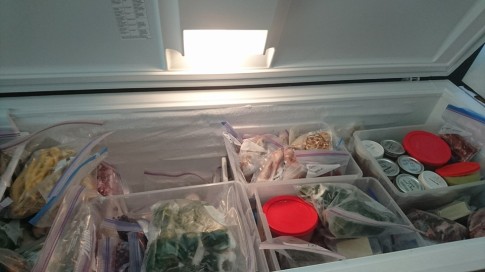 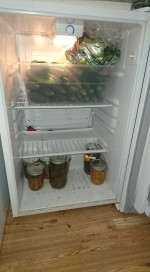 “fridge only” mini-fridge for backstock

Actually, it’s not a secret, and it’s not even my ritual. And it works for other citrus fruit as well. Half of it was taught to me as a child, and the other half was *just* suggested to me a couple of weeks ago.

But back up. Let’s talk about why I even have a grapefruit ritual. It’s because of the wax. Many fruits and vegetables, even organic ones, are waxed to preserve them and to improve their appearance before they hit the grocery stores/co-ops. The wax on organic fruits and vegetables is *supposed* to be from carnauba wax or shellac, which *should* be corn-free. Unfortunately, like many other things that *should* be corn free, they aren’t. I’m not totally sure what’s corny in them, but I suspect that the wax is mixed with a solvent like ethanol (from corn) to allow it to coat the fruit better, and then the ethanol evaporates leaving the wax and the corn particles behind.

Anyway, I haven’t ever really managed to peel a waxed apple, cucumber, zuchinni, or other thin-skinned fruit or veggie carefully enough to avoid contaminating the inside with wax residue from the peeling instrument. No matter how carefully I tried to peel them, I would end up getting some wax in my mouth and paying the price. So I just didn’t eat most fruit and many veggies out of season for a long time, opting instead to only eat produce from local farmers whom I could question about their practices. Then I became allergic to pretty much all winter vegetables, and I got hungry enough to get adventurous. With a little advice from some other adventurous corn allergics, I was able to arrive at a way to eat thick-skinned fruit like grapefruit safely.

This method is working for me. Your mileage may vary.
END_OF_DOCUMENT_TOKEN_TO_BE_REPLACED 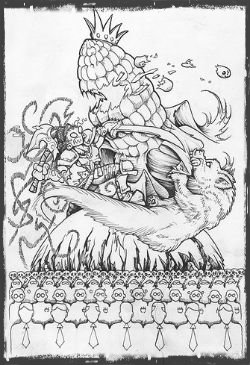